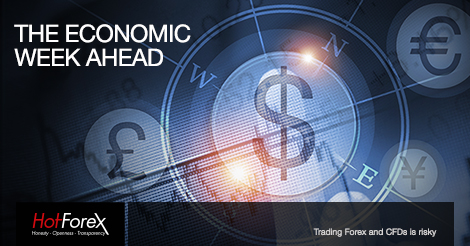 Geopolitical tensions reared up last week and eclipsed key fundamental data points. The escalating war of words between the U.S. and North Korea resulted in a textbook flight to safety into bonds, and also provided an excuse to take profits on equities, especially after the Dow posted nine straight record highs.


United States: Data in recent weeks continued to reflect the surprising dichotomy of stronger economic growth and slower inflation. Those dynamics have frustrated FOMC officials who have become increasing eager to normalize policy. Retail sales for July (Tuesday) will highlight the calendar. Headline sales are projected rebounding 0.4% after dipping 0.2% in June and 0.1% in May, while the ex-auto component should rise 0.3% versus the prior declines of 0.2% and 0.3% in June and May, respectively. The Empire State (Tuesday) and Philly Fed (Thursday) manufacturing indexes are due. The former is expected to rise 1.2 points to 11.0 in August, the latter is expected to slip 0.5 points to 19.0 in August. ( A third consecutive decline). July industrial production (Thursday) is forecast rising 0.4%, the same as in June, lifting capacity utilization to 76.8%. July housing starts (Wednesday) should rise to a 1.220 mln pace after the 8.3% June rise to 1.215 mln. The preliminary reading on August consumer confidence (Friday) should edge up to 93.5 from July’s 93.4. It’s held in the mid- to high 90s since the election. As for July trade prices (Tuesday), import prices should bounce 0.2% after June’s 0.2% decline, while export prices should climb 0.3% following the prior 0.2% drop. Other economic reports this week include The August NAHB homebuilder survey index (Tuesday) and July leading indicators (Thursday).


The FOMC minutes (Wednesday) to the July 25, 26 policy meeting will be of interest, but anti-climactic, given the ongoing divergence in growth and inflation trends, and the upshot in geopolitical risks.


Canada: CPI report is the focus this week as inflation remains a key variable for policymakers. We expect CPI (Friday) to be unchanged in July versus June’s 0.1% dip. Manufacturing shipment values (Thursday) are projected to fall 1.0% in June after the 1.1% gain in May. The hefty price driven 4.3% m/m plunge in June export values drives our manufacturing shipments projection. July existing home sales (Tuesday) and the July Teranet/National Bank HPI (Monday) are also due out.


Europe: Geopolitical risks continue to hang over the markets and have shown that Eurozone peripherals remain vulnerable to bouts of risk aversion. The ECB is still on holiday, but recent events will do little to change Draghi’s reluctance to commit to the further QE schedule just yet. Data releases are unlikely to change the central bank outlook. They include the final reading of Eurozone July HICP inflation (Thursday) as well as the first reading for German Q2 GDP (Tuesday) and the second reading of Q2 GDP for the Eurozone (Wednesday), none of which are expected to bring major surprises.


UK:The UK economy has been and is likely to continue to underperform the Eurozone and other peers. The latest Reuters poll found a strong consensus among 70 analysts for the BoE to leave monetary policy on hold until 2019. The calendar this week brings July inflation data (Tuesday), the labour market report covering June and July (Wednesday) and official retail sales numbers for July (Thursday).


Japan: Q2 GDP highlighted and was a big beat earlier expected growth to was 2.6% q/q pace from 1.0% previously, but came in at 4.0%. Revised June industrial production is due Tuesday, while the July trade surplus (Thursday) should narrow to JPY 300.0 bln from JPY 439.9 bln.


Australia: The employment report (Thursday) is expected to reveal a 15.0k gain in July jobs after the 14.0k rise in June. The unemployment rate is seen steady at 5.6% in July. The wage price index (Wednesday) is anticipated to expand 0.5% in Q2 after the identical 0.5% increase in Q1. The Reserve Bank of Australia releases the minutes to the August meeting (Tuesday). Assistant Governor Kent speaks (Monday). Assistant Governor (Economic) Ellis delivers a speech Thursday. 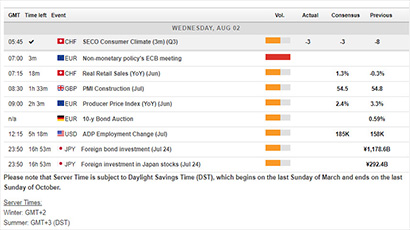 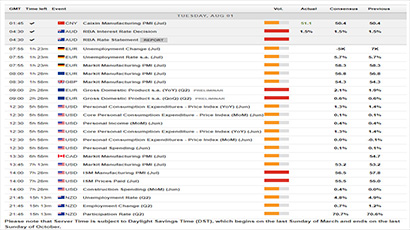 European Outlook: Asian stock markets moved higher, with a rally in banks underpinned by earnings reports and helping to offset pressure on exporters and automakers.