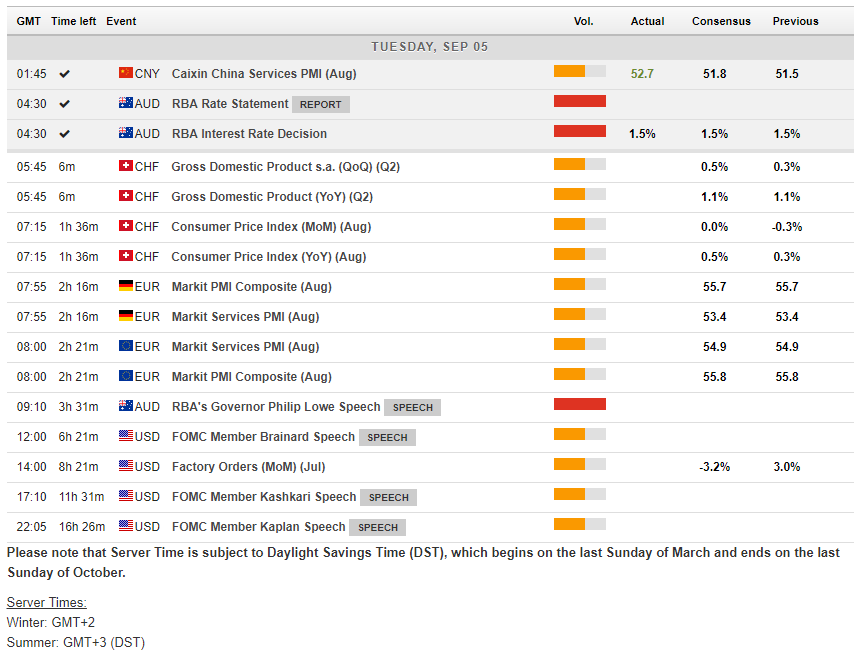 European Outlook: Asian stock markets traded mixed, with stocks in Tokyo and South Korea still pressured by North Korea jitters, while Hang Seng and CSI 300 managed to move higher. A stronger Yen added to pressure on Japanese exporters as did a weaker than anticipated Services PMI, and while war rhetoric has stepped up, global markets don’t seem in full on panic mode. The RBA left rates on hold, as expected and the ASX is moving sideways. U.K. stock futures are higher, after broad, but relatively modest losses in European markets yesterday. U.S. futures are in the red as Dow Jones and Nasdaq return from yesterday’s holiday. If U.K. stocks manage to stabilize, Gilts are likely to continue to move up from yesterday’s lows, while Eurozone markets could well outperform again, as tapering expectations are being pushed out amid rising geopolitical risks and a strong EUR. The European calendar has the final reading of the Eurozone services PMI, as well as the U.K. services PMI, Eurozone retail sales, and Swiss CPI and GDP numbers.


FX Update: The yen and franc retained a safe haven bid, although the degree of risk aversion was somewhat less than a run to the hills, and more of a weary expression of concern with regard to the North Korea’s ratcheting up of the geopolitical ante with nuclear testing. USD-JPY fell for a second day, logging a five-session low at 109.20. This extends the loss from the 110.67 peak seen before the disappointing employment report out of the U.S. last Friday. USDCHF declined to a four-session low at 0.9544, and EURCHF a five-session low, at 1.1367. EURUSD, meanwhile, settled to a narrow orbit of the 1.1900 level, holding below the1.1920 high seen yesterday. The USD index was near net steady, consolidating after dropping yesterday. AUDUSD saw some whippy price action into and after the RBA policy announcement and statement. The antipodean central bank left the cash rate unchanged at 1.50% for the 13th straight month, as expected, while the governor’s statement was somewhat mixed in tone, but welcomed signs of slowing in the property market while jawboning about the high exchange rate (which, if sustained, would lead to slower economic growth). AUDUSD settled near 0.7950-60, down from the intraday high at 0.7985.


The UK’s August construction PMI disappointed,coming in with a headline reading of 51.1, down form 51.9 in July and the weakness level since August 2016. A sharp decline in commercial construction work drove the headline lower, which more than offset robust growth in residential building. Civil engineering activity was new stagnant. Reduced business investment and associated heightened economic uncertainty were reported by respondents to be crimping demand in the commercial sector. Job creation in the construction sector was its weakest since July 2016 (which was the month after the vote to leave the EU, which caused a temporary economic shock). The biggest take away from the survey is that new order volumes fell for a second consecutive month, as this portends sustained weakness in the construction sector. Eurozone July PPI inflation fell back to 2.0% y/y, more than anticipated and with June revised down to 2.4% y/y from 2.5% y/y reported initially. However, preliminary August HICP data already showed a renewed uptick in energy price inflation that will likely be reflected in the PPI number for that month as well and at the same time, PMI readings suggest that the disinflationary phase in cost pressures has come to an end. So the overall tide in inflation seems to be slowly turning, even if the PPI number came in down in July. 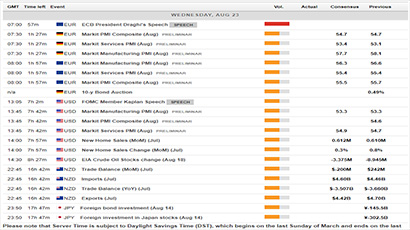 European Outlook: Asian stock markets moved higher, after a positive session on Wall Street amid reports of progress on Trump’s overhaul of the tax code and a solid PMI reading from Japan. The Hang Seng continues to outperform and is currently up 0.91%.